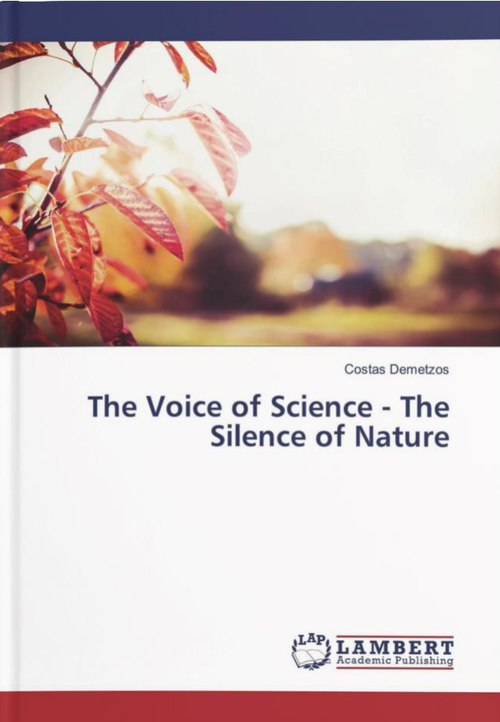 The Voice of Science - The Silence of Nature

The Voice of Silence

This wonderful book, “The Voice of Science, the Silence of Nature”, written with loving care by Professor Costas Demetzos, is a journey through the Cosmos and its evolution over time. It deals with fundamental concepts of how it was born, of what the laws that dictate its function are, of what life is, and of how one could unify our current understanding of our position as human beings in this apparently infinite and eternal universe that appears to exist among other universes, participating in the so-called “multiverse”. He started by explaining the basic concepts of complex systems theory as a discussion with a wise old man, his “grandpa”, an alter ego, explaining hard concepts in a simple, but not simplistic, actually quite accurate, didactic, grasping manner. These concepts historically were first intuitively examined and defined by Pythagoras of Samos and his student Alkmaeon of Croton, a Greek colony in Southern Italy. Pythagoras introduced the “harmony” of the Cosmos, the latter understood as a complex dynamic system in equilibrium or balance, between disturbing and re-establishing forces, an idea that was later extrapolated by Alkmaeon to human beings and called “isonomia”. It is worth mentioning here the definition of a “complex system” as expressed by Alkmaeon: “Αρμονία δ’εστί πολυμιγέων ένωσις και δίχα φρονεόντων συμφρόνησις”, Αλκμαίων Κροτωνιάτης (i.e., “Harmony is the union of multiple, mixed, components, and the agreement of the opposites”, Alkmaeon of Croton). This concept was later presented by Epicurus as “eustatheia”: “Ευστάθεια” το της “σαρκός και ψυχής ευσταθές κατάστημα”, Επίκουρος Αθηναίος (“Eustatheia”, the balanced state of the flesh and the soul”, Epicurus of Athens). The concept was presumably lost during the so-called “dark ages” and reappeared as “homeostasis” in the 20th century, described by the legendary American physiologist Walter Cannon. The author continued his discussion with grandpa with explaining the Cosmos as a complex system calling it “macrocosm”, consisting of smaller (“microcosm”, “nanocosm”, etc.) and larger (“megacosm”) complex systems, with novel properties emerging from the smaller to the larger physical dimensions of their constituents. He described the laws of thermodynamics, quantomechanics, etc., and proceeded to explain the creation of life via molecular self-assembly and cellular and multi-cellular organismal self-organization (“autopoiesis”), and then, by making unifying syntheses and using useful metaphors, he inter-connected the inanimate with the animate world, including the human individual and its societies. Here, he discussed and then used the biophysical concepts of “metastable phases” and “lyotropy” to explain changes in the macrocosm. 8 As our universe most likely started out as a singularity, -an infinitesimally small, ordered ball of energy, which has ballooned out and continued to expand as time progresses-, “entropy”, i.e., disorder, has been constantly growing with time, granted that there is more space and, therefore, a larger number of potential states of disorder. On the other hand, the total complexity (or information density) of our universe has been increasing with time, both because of the inevitable expansion of its parts, while, specifically, on our, at present, “unique” intelligent life-bearing planet, the “negative entropy” (order) that is life, adds another enormous amount of complexity to our Cosmos. In fact, if one plots complexity, expressed as “power density”, over the time of about 14.4 billion years that took our universe to reach its present state, there is an exponential curve, with life rapidly evolving on the time scale of the last 4.2 billion years, to ever more complex living organisms, with pinnacle the human beings and their immensely complex brains and civilization. This beautifully written, erudite, and approachable book has a lot to teach and it does so with aplomb. It is a simplified, understandable tour-de-force, that will educate students and professionals alike. I enjoyed reading it and I recommend it with great enthusiasm. George P. Chrousos, MD, MACP, MACE, FRCP, Professor of Pediatrics and Endocrinology Emeritus, Holder, UNESCO Chair on Adolescent Health Care, Director, University Research Institute of Maternal and Child Health and Precision Medicine, National and Kapodistrian University of Athens, Athens, Greece.